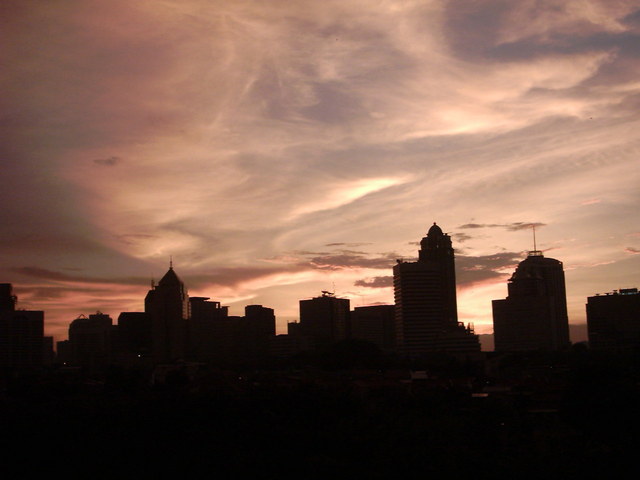 The Jarkarta Stock Index (JCI) had stagnated in performance (SGD terms – blue line) over the last 3years. This is in the period of the newly elected President Jokowi. India on the other hand, who is also undergoing a major economic reform, has been a major out-performer for the last 3years. 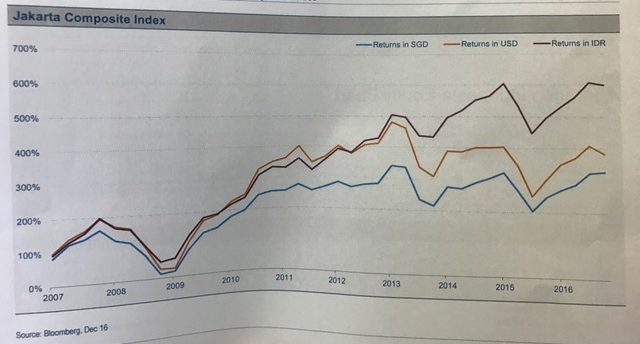 However, it is all not gloomy for the Indonesian equity market. Currently, the JCI trades around 16x PE at a 5600+ level. This may represent an opportunity to enter the market at a reasonable price. From a macro view, these are a few key points that makes Indonesian equities attractive. 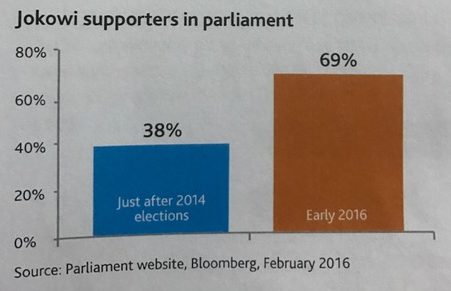 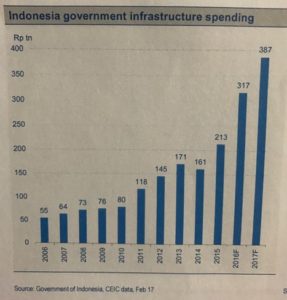 In 2014 and 2015, the low level of support had delayed reforms. Hence, not much may have changed in those 2 years. It is only since 2016 that President Jokowi has gained stronger support. This has resulted in more effective approvals in policies to push through record breaking spending by the government on infrastructure. It is forecasted that this spending will grow by a further 20% to Rp 387tn in 2017.

If you have been to Jarkarta, you would know that the traffic condition is in bad shape. The city even lacks a train network service which cities like KL or Bangkok already have.

2. Return of Sri Mulyani Indrawati to be the Finance Minister

Who is Sri Mulyani Indrawati?

As Managing Director of the World Bank, she was previously ranked No. 37 most powerful women by Forbes. In July 2016 she returned to be a part of Jokowi’s “dream team” cabinet and is instrumental in a push to get millions of Indonesians to take part in a tax amnesty.

An abstract from a bloomberg report: The tax reprieve, which ended on March 31 and was a key plank in Widodo’s reform agenda, levied generous penalty rates as low as 2 percent to allow those who’ve been hiding their true wealth to clear up their affairs, no questions asked. It’s already prompted businesses and individuals who’d stashed money at home and abroad—including Aburizal Bakrie, former chairman of Golkar, a major political party, and Tommy Suharto, son of the country’s former dictator—to bring more than $330 billion to the attention of the tax office.

Her appointment is viewed by analysts to be crucial to executing tax reforms and keeping government debt well managed. 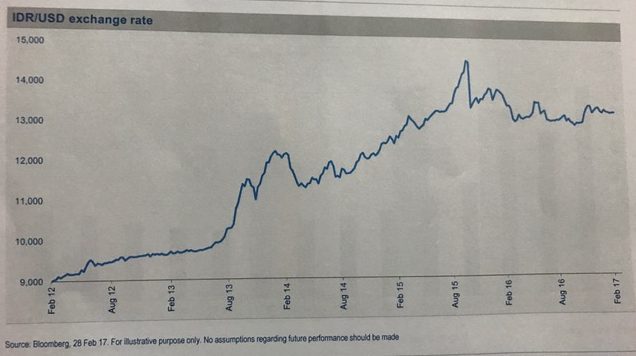 The Ruppiah lost grounds rapidly during year 2013 when US Fed started to discuss on rate hikes. When IDR/USD reached near to 15000 level, there were fears of a “1997-like” currency crisis. Since then, IDR has actually stabilised and this has contained domestic inflation. This is amidst several rate hikes by US FED in 2016 and 2017. 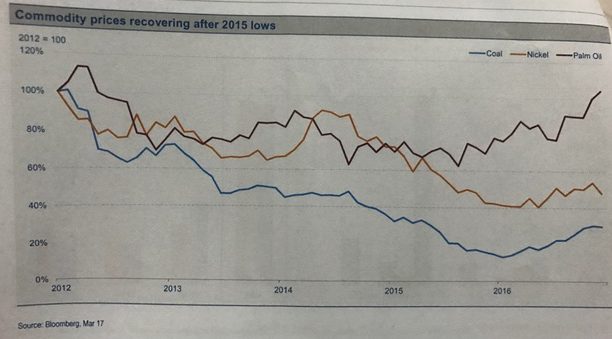 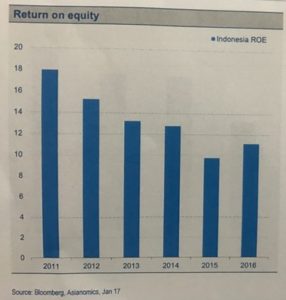 Coal and Palm Oil are some of Indonesia’s main commodity exports. Commodity prices are highly cyclical and prices have somewhat recovered. Companies in these sectors will benefit directly. The banking sector is expected to be the next to benefit as it possibly will reverse certain write offs in non-performing loans.

According to Bloomberg chart on the right, the average ROE of companies in Indonesia has also reflected a bottoming out.

How can you invests in Indonesia equity?

You can gain access to Indonesian equity by 2 ETFs offered by Lyxor and DBXt. Both are USD based and listed in SGX.

However, I do suggest the db x-trackers MSCI Indonesia Index UCITS ETF as it has more liquidity. The ETF will track JCI for you and it will have almost 39% into the Indonesian finance sector. The management fee is 0.65% p.a. 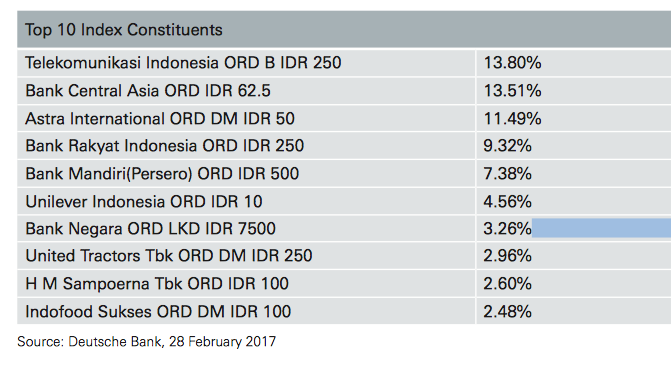 Aberdeen Asset management and Eastspring Investments run unit trust funds that are SGD denominated. While it has under-performed in the short term, I do suggest the Aberdeen Indonesia equity fund as it is a bottom-up fund manager. What this means is that the fund manager selects stocks based on valuations.

Fund beta is 0.62 and as seen in the sector allocation, it is very different from the index. Only 17% is into finance sector. As of current moment >20% is into small cap Indonesian shares.

Fund management fee is 1.5%p.a and it is CPFOA approved. 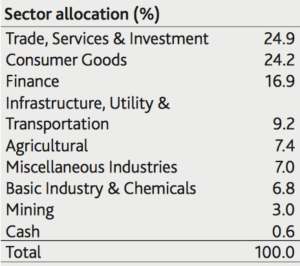 3. Shares of companies with businesses there

The second is Delfi Ltd. This company is in the business of making chocolates. Specifically to Indonesia, it has more than 50% market share and has over the years been preferred by Indonesians over the other international brands like Mars!

Other companies which has Indonesian businesses include palm oil companies such as Golden Argi, Bumitama Argi and Indofood Agri.

You should research and track valuations if you are investing into shares. If not, the ETF or unit trust will be a better approach to participate in the Indonesia equity story on a diversified basis.

The current S&P rating for Indonesia sovereign bonds is BB+ with a positive outlook. The BB+ rating is the highest junk level, one notch below investment grade. S&P has left the door open for a future upgrade but the Indonesian government will need to enhance its fiscal performance. If there is an upgrade in rating, it will be a further boost to corporates in Indonesia.

Josh Tan
I have been providing investment advise since the global financial crisis of year 2008 where markets tumbled at breakneck speeds. Focusing on a dividend strategy (not just price) helped me personally stay the investment course and profit from eventual market upswings. Currently, many share markets are close to an all time high but there are definitely still opportunities with a WIDE RANGE of funds that you can buy to start building dividend income! 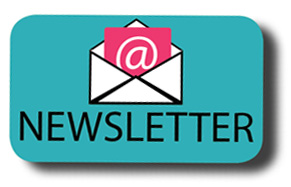